I have got into my binge reading mode. I do this occasionally when  I’m on holiday. One book follows another and I can’t get enough, especially if the books are good.

It started with books from my daughter’s book shelf, not the heavy history or philosophy ones she likes, but fiction. Even there we have different tastes. She loves books like Lord of the Rings and Phillipa Gregory. I am an eclectic reader, and tend to go for world literature with a very heavy Indian bias. So finding a couple of Jo Nesbo novels on her book shelf, airport buys, was refreshing and I read them both. Police and The Son, both really well plotted, blood curdling crime books.

Then as you may be aware I went to the AAUW book sale, here in Buffalo. See my blogs on http://www.glasgowwestend.co.uk/the-american-association-of-university-women-book-sale-buffalo-new-york/  website. I found some great books and was tempted to buy even though I’ll be flying back to Glasgow and not have room to carry them home.

I wanted a change from reading a crime book. I started with Chitra.B. Divakaruni’s One Amazing Thing. A beautifully written novel on how nine people cope with being stranded in a collapsing building, the Indian visa office in USA,  during an earthquake. I liked the fact that it had diverse characters and each had their own stories and secrets to reveal to all.

My next choice was Island’s End, a  YA book written by my cousin. I am not biased when I say that every school library should have a copy of this book and children should read this. Padma’s debut novel ‘Climbing The Stairs’ had already won several prizes and she had established herself as a good writer. This book is unique. The novel Island’s End is set in the Andaman Islands of India. Some tribal people who have never had contact with the mainland or with modern civilization live in these remote islands. Padma is an oceanographer and had spent time on the island and come into contact with the natives. As the book blurb says:  “She was inspired to write this after meeting with the natives who had overcome a natural disaster and preserved their unique way of life despite several threats to their survival.” The story is about a young girl Uido who becomes the spiritual leader of the tribe. The story weaves around strangers arriving at the island and threatens their old way of life. Will Uido manage to help preserve their old ways and fend off the strangers? 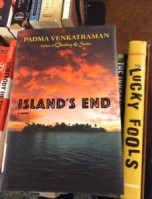 Padma’s meticulous research in their way of life and basing some of the events on true facts makes it a fascinating study of lives that have been untouched by modern civilization. It was the language that really made me love this novel. Padma seems to be driven by a spiritual hand. The writing flows like the waves in the sea that surrounds the island. I was reminded of our grandfather, Padma’s and mine who started writing Law Journals from a very young age that led him to become a Senior Advocate in the Supreme Court in India. He  wrote and published  Law Journals.They are still one of the leading  law journals in India. She’s gifted like him and it shows in all her work. Pick it up if you can and read it.

I also finished reading Akil Sharma’s ‘Family Life’. A memoir turned novel that took him nine years to write. It is written from the point of view of a young boy-of a newly arrived Indian family in USA-whose older brother becomes brain damaged after diving into a swimming pool and hitting his head. The three minutes of lying in the bottom of the pool, after hitting his head, changes all their lives. Heart rending but beautifully written.

Website of Vaseem Khan, author of the Baby Ganesh Agency series and Midnight at Malabar House

The Federation of Writers (Scotland)

How To Become a Better Writer—Best Epic Fantasy Books

"Words kill, words give life. They're either poison or fruit. You choose"- Proverbs 18:21. I have chosen. I heal through poetry over here...

A potpourri of emotions